Kendali followed his lead, sliding up, off the wall and leaning away from the stool, steadying herself. She squeezed her dress between her legs to absorb the aftermath. They rocked to the music, arms cradling each other and hands tempering fiery flesh.
“Ah, Kendali.”
“Yes, honey.” Coda.
He tongued her down, his arms snuggly swathed around her waist. “Hmph. And you were worried about being watched.” He tilted his head toward the table holding their belongings. A few feet beyond, the couple who had been watching them were performing their own baptism.
“Wow,” she sighed.
“Looks like they caught our Holy Ghost.”

An affair inside an affair inside an affair. Kendali Grace the bestselling, number one author of Dominion Publishing is preparing to launch her tenth and final installment of the wildly successful The Vixen Notebook series, a collection of stories that showcases her experiences as a video vixen in the hip hop and R&B music industry. Her star power is responsible for more than a third of Dominion’s revenue, the most powerful publisher of Black urban books. Kendali and a very married Hiram Rivers, her boss and chief of the literary empire, indulge a decadent affair, but what happens when he introduces her to his frat brother Khai Draper? She adores Khai and he immediately has a thing for her, but how far will they let this thing go?
Red Ink Rendezvous is the steamy journey of two souls discovering their sensuous truths, one erotic encounter at a time.

The Red Ink Rendezvous Collection is a set of standalone novellas inspired by The Red Ink Saga, a two-part dramatic series available on Amazon.

This novella is a standalone inspired by The Red Ink Saga.

Kendali Grace the best selling, number one author of Dominion Publishing is writing novel after novel of the wildly successful The Vixen Notebook series, a collection of stories that showcases her experiences as a video vixen in the hip hop and R&B music industry. Her star power is responsible for more than a third of Dominion’s revenue, the most powerful publisher of Black urban books. Maxmillian Gray, Dominion’s Director of Technology and author of several cyber espionage bestsellers, is dedicated to his technical duties, which means many late nights at publishing headquarters.

In an effort to meet her deadlines, Kendali stays at the office until the wee hours to focus on finishing her books. Commitment to craft brings these two unsuspecting soul mates together, discovering that their obvious differences are the gateway to their sensuous similarities. Kendali, devoted to her live-in lover and steadfast companion Dre Walker, is most loyal to him but not necessarily faithful, especially since he leaves her smoldering, in heat, while he builds his fortune. Maxmillian to the rescue! He is ready, willing and more than able to extinguish the fire of her desires

But what happens as their lust turns to love and Hiram Rivers, Dominion’s CEO and everybody’s boss, turns up his own heat in pursuit of Kendali Grace? How will Kendali maintain balance amongst the men in her life and satisfy her need to feed her passions? Will Hiram draw her unto him with his power and masculine prowess, for he is the manifestor of all her dreams come true? Or does Max have the code to crack her heart and keep her inside his world? 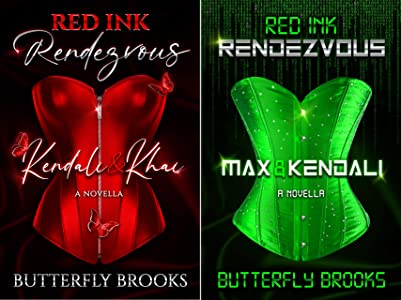