Hey Girl! Check out these new releases from July 5th-11th.

One man who can have it all. Except the woman who sets his soul on fire.

Midas Warren.
A name synonymous with wealth, power, privilege and perfection. He’s the financial guru, hotelier and son of Black royalty. But what else is hiding behind his bespoke suits and business prowess?

Nevah Savadogo.
The woman who turns gold and gems into beautiful creations. She can craft anything out of precious metals, but can’t seem to do the same with her life. Until she has one night with a man who breathes life into her.

They had their one night together but they walked away from one another for their own reasons. But fate steps in to give them another chance at forever.
Will the man with the golden touch find a way to keep the woman who owns his soul? Or will the darkness and ever present danger keep them separate forever?

Melanin in the City by Iesha Bree and C. Monet

Melanin in the City follows the Barton sisters who reconnect after a devastating circumstance.

Charleigh, Cia, Roxi, and Korrin learn that although they may have been apart for a while, they just might have more in common than they let on. Between scandals, saving careers, secrets, and unhappiness, they realize it may be time to freely love and stop hiding behind it and stressing over everything they’re facing in life. However, love and success doesn’t come easily, and sometimes find themselves forced to choose between the two.

Follow the Barton Sisters in Melanin in the City as they migrate through grief, drama, sisterhood, and the quest for love.

Keep It Between Us 2: The Finale by Charae Lewis

A secret is meant to be kept until mad day arrives and everybody gets exposed. Dri understood his pact, but realizes everyone he thought he could trust isn’t who they claim to be. He’s lost with no where to turn until his back is against the wall and is forced to show what he’s made of.

Kat has everyone’s card and she won’t stop until they’re under her authority. There’s a vendetta that must play out and no one will stand in the way of her mission. She’s considered herself the ruler of many and Dri is just another notch on her belt.

Why she wear that…Look at her…Somebody her size shouldn’t…She ain’t gonna never…
Kids can be cruel, but it was what their parents whispered about me when they thought I wasn’t listening that affected my self-esteem the most. – Justyne

Justyne was teased about her weight for the majority of her life. From the kids at school to her mother’s friends, she was constantly put down and berated by her peers and others because of her size. It became the norm for someone to judge her based on her looks, not what was in her heart. Discovering her boyfriend Josiah was using her for his own personal gain broke her spirit for the last time; she realized she’d been giving herself away for the sake of others for far too long.

Enter Leandré, the police officer who women loved to see in a uniform and on their arm. Dating had become too easy; he longed for THE woman that made him take a second look. Responding to Justyne’s cry for help when Josiah stole her car, Leandré ’s faith in love at first sight was restored. But would she reciprocate? Or would Justyne brush him off as yet another user?

Leandré and Justyne’s worlds collide on a steamy night in Jamaica when a one night stand turns into something much more life changing. Will the change bring this unlikely couple together? Or does Justyne let her insecurities about her weight stand in the way of her chance at happiness? Find out if Leandré ’s promise is one that he keeps and if Justyne chooses to love herself above everyone else.

Hassan Black, money man for the Black Mayhem Mafia, is known for his wild and reckless behavior. Out of his brothers, Hassan is the one that often finds himself bringing the most trouble to the family. Even though he has his vices and demons, like all men, Hassan has positive qualities that make him an asset not only to the family business but women as well. The playboy, Hassan has more women than he can juggle… but he’s willing to discard of them all if it means securing the love of Vanna Lewis.

Vanna has never valued the love of a man. If anything, she’s seen men as a way to elevate to the next phase of her life. Used to using her charm, beauty, and appeal to get whatever she wants, Vanna meets her match with Hassan. She can’t deny the instant attraction they share and must completely switch up how she typically handles men.

The two fight against their brewing love for as long as they can, but because of his brother and her best friend’s relationship, they find themselves together often. One night of intimacy leads to the conception of their first child. Unfortunately, having a baby on the way doesn’t make settling down as easy as Hassan thought it would be, and he learns the hard lesson Vanna lives by – she doesn’t get mad; she gets even…

Her Deep Reverence: Pregnant by a Black Mafia Don, is a street lit romance heavy on love gained, lost, and loyalty betrayed. Will their bond be restored by fate? These characters were first introduced in “In His Possession: Bought by a Black Mafia Prince” but that story does not have to be read to enjoy and understand this one, however, it is an amazing read.

Show Me Your Love 2 by Mo Howard

At the end of Show Me Your Love part one, Jahzara found out that the love of her life was unfaithful. As she tries to move forward after finding out she’s pregnant Joshua is adamant on trying to reestablish the relationship he ruined. He is willing to do anything to get her back even if that means using force.

DeShawn Mackee is a man who knows what he wants. He’s used to getting his way and not taking no for an answer. When he meets Jahzara, he is immediately captivated by her beauty and is determined to get to know her.

Nyah and Chase are drifting apart but she isn’t sure why. Frustrated Nyah turns to a crush who has plans of becoming much more. Will she give into lust or remain faithful when put to the test?

In the conclusion of Show Me Your Love Jahzara will have to mend a broken heart and learn how to give love a chance after experiencing a life changing loss. Will she be able to move through the storm and receive her happy ending? Will she and Nyah become the women they’re meant to be or remain the same?

Visiting Mrs. Caldwell on Sunday afternoons was one thing. Dealing with Leon, her skeptical grandson, was another.

Helena Marshall, a seminary student making regular visits with an elderly parishioner, risks losing her ministry when she falls in love with Leon Huggins, the lady’s skeptical grandson.

Leon showed up every time she made her visits. Did he really mind that she was training to become a minister?

Join Helena on her journey into life, ministry, and a happily ever after.

His love for Dacy wouldn’t die.

Lee Wiley was patiently waiting for Dacy to get out of prison so that they could be together again, but they had a long wait. Dacy had fifteen more years on her sentence, and she had told him in no uncertain terms to move on with his life.

But Lee wasn’t having it. He could wait. He found it difficult to move on without her and he would grasp at any means to set her free so that they could be together once more.

Every Part of You: A Marriage-in-Crisis, Surprise Baby Romance (The Hometown Series Book 2) by Jessie Marie

He wants her to stay; she wants her space. But what happens when one plus one equals three?

When we separated, all I felt was relief.
I’d get my space, find myself.
Fight my own battles instead of his.

This would be the worst time to get pregnant, right?
Tell that to my uterus.

When Catalina asked for a separation, I left.
I had to; I had no choice.
I thought that was the end of our lives together, the end of us.

So what do I do when Catalina gets pregnant and I get a second chance?

Every Part of You is a second-chance, marriage-in-crisis, surprise baby romance about unexpected hope in the face of turmoil. It is the second in the Hometown series and can be read as a standalone. Readers can expect the usual hijinks from the crew, including a Parent-Trap-type set-up, late night cooking sessions, and a coming-home surprise. Be prepared to laugh, cry, and swoon in equal measure.

His Love Is More Than Enough : Kalypso and Bellatrix by Mel Dau

A father’s love is an amazing thing but is it enough to love what others deemed flawed?

For Kalypso (Kal) Jenkins, life has taken many turns but as his Mama Jillie says, “It’s all a part of his life Story”. When his life story determines he will be a single father to his autistic son, Kalypso Junior (KJ), he makes the decision to be the best father he can be to KJ. All his moves are to make a comfortable life for
KJ and himself. When tragedy strikes he is left to pick up the piece of his life and adjust to the changes in his and his son’s life. Will he be able to manage the changes that could very well break him or will a beautiful stranger to him but friend to KJ be his saving grace?

Bellatrix (Bella) Anderson has been the light for many people all her life. After a tragic lost brings her from Orlando, Florida to Mount Pleasant, South Carolina she allows that light to be caste in the life of KJ. With a light so bright, will it be able to cast out the darkness that will soon loom over the heads of Kalypso and
his son? Will she be able to share her light to give strength for others to turn on their own or will her light be snuffed out.

Find out what happens in this Novella when light meets darkness. Will love be enough to tear down the darkness that threatens to damage all that Kalypso has built for his son or will Bellatrix be the light that changes the direction of this chapter and all to come after it in Kalypso’s life story? 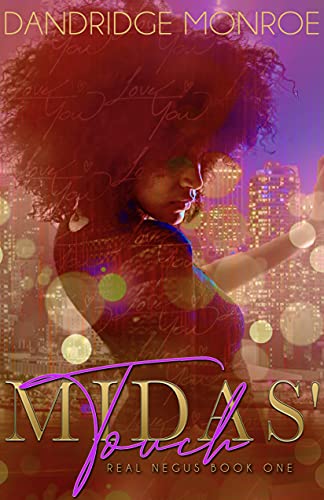