Hey Girl! Check out these new releases from November 4th-10th.

Someone She Loved by B. Love

The Whitmore sisters, Natalia, Aria, and Sofia have had their fair share of trauma and drama when it comes to the men they love and their temporary fill-ins. Each sister has experienced love in a fatal way, and each time, just because it seemed over, didn’t mean it quite was. Letting go doesn’t seem to be any of their strong suits, and they can’t advise one another when the three are experiencing the same problems, almost at the same time.

Natalia is the youngest, and where the story begins. Natalia and Dominic have a son together, and she’s always loved him. His commitment shy ways eventually push her into the arms of the spontaneous and carefree Jones, who if Dominic isn’t careful, could take Natalia and claim her in the most permanent way possible.

The Whitmore Sisters aren’t always the ones who got away, sometimes their men are. If they aren’t honest with themselves, each other, and the men involved… they might each miss out on true, unconditional love. 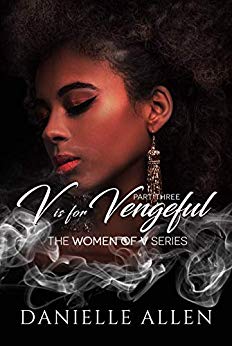 Maybe it was the journalist in me, but if life taught me anything, it’s that nothing is free.
When nepotism cost me the coveted position of Editor-in-Chief at the Hamilton Herald, I was pissed. And when I brought my complaints to the advisors, I was forced to quit. So, I was going into my senior year with a major chip on my shoulder. Although I kept my composure in public, inside I was fuming. The powers that be had officially ruined my life. As a journalism major, fired from the school paper, my future looked a little less bright. So when I was selected as a woman of V, my desperation superseded my moral compass and I accepted without hesitation.
V would give me access to more opportunities than the Herald ever could.
V would take my career to heights I never even considered.
V would change my life for the better.
V would have me sabotage my enemies and leave their ashes in my wake.
I just didn’t consider the collateral damage.
But like I said, nothing is free.
People always want to know what V stands for. For me, V stands for vengeful.

Anything Goes (A Standalone Novel) by A.C. Taylor

From the moment Alauni saw Law Montgomery, she knew that she wanted him. But he was the one thing that she didn’t mess around with…he was a cop.

Law doesn’t care about Alauni’s attempts to stay away from him. He knows what he wants, and given the way that her body responds to him, he’s pretty sure that he can get it. But his need for her goes beyond the physical. He sees Alauni in a way that she doesn’t even recognize. He knows her heart, and he’s determined to convince her that he can take care of it. But when he finally steps into her world, he soon realizes that it might be more than what he bargained for.

What happens when it’s no longer just fun and games, and things get real? Will Law be able to handle the challenge and be all in? Or will Alauni give him every reason to walk away and never look back?

After the untimely passing of her father, Summer Jones, was left trying to find normalcy without him. When the façade of her having it all together became too much to bear, Ryder Greene stepped in, and offered her the comfort she needed.

While being Summer’s escape, Ryder realized she unintentionally helped him too. She helped him consider the possibility of love again. After divorcing his first and only love, Ryder wasn’t sure he had any love left to give.

Two individuals suffering from grave losses came together and formed an impenetrable bond. She was his last hope for love. He was the breath of fresh air she needed to get back her life back on track.

Both were too scarred from loss to give love a fair shot. But when love called, running was no longer an option.

ready for love is book two of the Roseville series.

Layla and Kyler’s marriage have been rocky for quite a while now. To reconcile things with his wife, Kyler takes it upon himself to book a therapeutic retreat for himself, Layla and their two children, Bakari and Nina. He wants to work things out, but will his wife give the same effort? Layla attempts to stifle her hurt feelings from her husband’s wrongdoings, but can she continue to hide her own wrongdoings? Has all of the truth been spoken? With the assistance of Dr. Jones, the couple looks deep into their past and try to figure out how did they get here. Will they be able to forgive and move on? Let’s find out.

Love 101: A Novella by Aubreé Pynn

Class is in session but not for the students.

Makena and Osiris are thrown into a last-minute teaching arrangement when the university scrambles to find space for the influx of students. They quickly learn that this situation isn’t ideal for either of them.

Makena is an outspoken, quick on her feet first year professor who is trying to make lemonade of lemons. She’s sucking up the fact that her dreams for her career had to be sidelined. Taking a teaching job at her alma mater wasn’t on her list but she’s determined to prove that she belongs in a man’s world.

It’s a man’s world. That’s Osiris’ motto. He lives by it and is going to show Makena that she doesn’t stand a chance against him or his succession to department chair. Well, that’s until their detest for each other quickly turns into lust.

With the mess they made for themselves they have to figure out the most effective way to teach their joined classes. Will Makena and Osiris school the students or will they get schooled? Find out in Love 101.

In the magnetic world of Atlanta, there is a secret shared between women who want to forgo love and their everyday reality.

Pleasure, sex, and sensual associations guide these women to a special enigmatic foundation of men known to tailor to their wildest desires: The Brothers of Kemet. At the head of B.O.K is president, Kwame Hughes, one of Atlanta’s sexiest men and a wealthy bachelor who happens to not trust in love, since the tragic loss of his wife. His needs are masked in the desire to make sure every woman he is with will ‘be okay’. When his personal mantra leads him to cross paths with the alluring Karma Assante who has something no other woman has had since his wife: his attention, the question of love will change his mantra from ‘being okay’ to ‘trust in me.’

Karma Assante’s life just hit a huge whirlwind. One that has made her trust in love falter. When a chance encounter introduces her to Kwame, all Karma wants is to do her job, not put her trust in failure again or fall for a man who takes her breath away.

Join the passionate beginnings of the Brothers of Kemet, Karma, and Kwame in Love, Trust, and Pleasure by award-nominated author Kai Leakes. 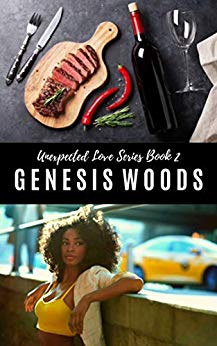 The Way To His Heart: Unexpected Love Book 2 by Genesis Woods

They say that the way to a man’s heart is through his stomach, but for Chef Bellamy Jones, it’s going to take a little more than a soul food infused crepe suzette to catch the man of her dreams or catapult her career to the next level.

When a very popular and well respected food critic visits Bellamy’s restaurant to critique her ingenious take on French cuisine, she soon questions her love for all things culinary after the infamous Ren Phillips less than stellar review on her food is released for the world to see.

A chance run in between the two not only explodes into a TMZ worthy headline, but it also sheds some light on a sweet little treat Bellamy thought she’d never have to share with anyone else but herself.

Their story isn’t a fairy tale. It’s something else entirely…

The last thing King Dafari expects to find while traveling to America is love. Marrying a woman who isn’t from his native land is strictly forbidden, but Ebony is everything he could ever want—bold, selfless, and drop-dead gorgeous. No matter what laws and traditions stand between them, he wants to make her his. But that’s before he discovers she’s keeping secrets that could destroy them both.

Ebony isn’t exactly looking for love, either. She’s too busy running from her past mistakes and trying to reinvent herself to worry about romance. Then she crosses paths with the protective, mysterious, and oh-so-handsome Dafari. Resisting him proves to be more than she can handle, but as it turns out, her prince charming is keeping some secrets of his own.

As enemies of the crown circle, ghosts from their pasts loom large, and duty calls, Dafari and Ebony have to wonder if love might just be a royal luxury they can’t afford… 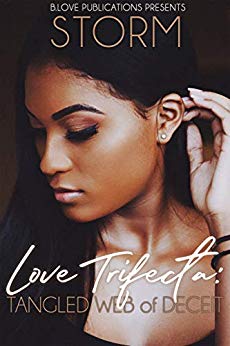 Langston Graham, the hot-shot attorney with five degrees under her belt, a knack for fashion, and an insatiable taste for locking up criminals, finds herself loveless. Her hard, take no prisoners attitude leaves her lonely and wishing that she could find someone to meet her standards.

When she meets Darren “Yatti” Collins, her whole world turns upside down. Darren owns a chain of restaurants and Laundromats, but his secret life has Langston wondering what it is that he isn’t telling her and leaves her snooping around to find out the secret he’s hiding.

Leslie Graham has always been the sweet, vulnerable, timid girl. Her relationship with William, the sexy accountant, has her feeling as if she was the only girl in the world. When she finally gets her big break in the fashion world, working with multiple men and women alike, that’s where her problems begin. Will becomes abusive mentally and physically, thinking that she was sleeping around on him. Her best friend Christian takes notice of her dilemma and tries to intervene the best way he knows how without tripping over the fine line of friendship. The problem is, he can’t hide his feelings for her any longer.

Lauren Graham is the feisty chick that has no problem telling it like it is. The triplet that was born last, is a spoiled brat and runs the streets doing whatever it is that she pleases – until she meets Darren’s brother, Kofi, who is determined to tame her and her ways. Kofi has Lauren running from him every chance she gets.

The Graham sisters are in for the fight of their lives. Follow these triplets as they discover that loving the wrong man could be lovely or deadly.

Lost You Found Me: A Real Love Story of Redemption by France Neptune

Rachel thought she and Dennis were the perfect couple. So handsome and fine, he was her first love, a dream come true, and the first boy to tell her she was beautiful. It wasn’t long before she was head over heels. When he told her that he couldn’t live without her, it felt like fate, but Rachel hadn’t counted on Dennis’s other side. Holding on to the hope that things would get better, Rachel stayed with him and rode the emotional roller coaster, determined to make their relationship work, until the day came when she couldn’t take it another minute. Decisions were made that put a chain of events into motion that she never would’ve imagined she’d be capable of surviving. 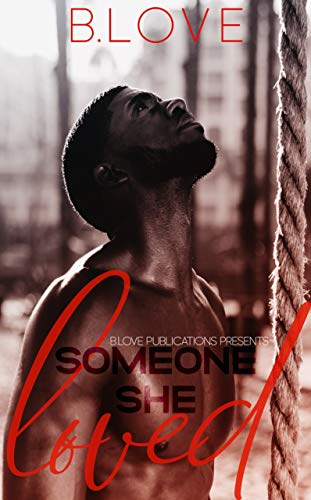