Hey Girl! Check out these new releases from October 7th-13th.

Drive Me To Ecstasy by Monica Walters 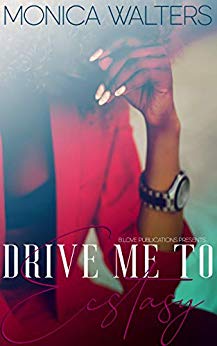 Teaching young, impressionable minds has always been Kendall Washington’s passion. She thrives on reaching them where even sometimes their parents can’t. Their welfare is also important to her. Coming from a loving, two-parent home, she feels that she knows what love looks like, however, when she meets Cassie Daniels, she isn’t sure if she’s seeing love or neglect of some kind. When she reaches the child’s father, she gets the answers she’s looking for and most of them have nothing to do with Cassie.

Price Daniels has a difficult task at hand. The mother of his eight-year-old daughter is in the wind, leaving Cassie with him for a weekend visit and not returning. While Price loves his daughter and will do anything for her, he’s facing a dilemma. He doesn’t know the first thing about being the full-time parent of a little girl. The youngest son of deceased parents and only having an older brother, there are no women in his life to show him the ropes. When he gets a note from her teacher, he’s praying she doesn’t report him to CPS, however, when he meets Ms. Washington, he wants to solicit her help with Cassie and so much more.

Price and Kendall have one common interest; taking care of Cassie and making sure she has everything she needs. Once Cassie is squared away, the focus somehow shifts to their own needs. Will they be able to fulfill those needs through the attraction they have for one another? Or will too many lines be crossed if they even entertained the thought?

His and Hers: and then this by Brittanie Smith

Between secrets, drama, old flames and a depleting savings, Shaunie can’t catch a break. With a possible life altering situation, Stacee adds nothing but fire to the drama. Literally!

Book two in the His and Hers series continues to unravel the lives of Shaunie Barnes and Stacee Reynolds as they’re challenged with complex relationships, situationships and their unconventional living arrangement.

A Southern Gentleman Two: A Billionaire Romance by Tracy Reed

“I never meant to fall in love. I thought Avery would be a good distraction…a way to mend my broken heart. But the moment she sat next to me, I knew she was the one. Now all I have to do is keep my celibacy vow until our wedding night. Avery said she understands my vow, but that hasn’t stopped her from trying to seduce me. God help me make it to the wedding.”

Billionaire Businessman Jeremiah Logan went to New York to buy a company and nurse a broken heart. Instead of getting a company, he gained an ally, a business partner and the heart of the most eligible socialite in Manhattan.

When it came to love, Avery Marshall assumed the best she could hope for was a marriage of convenience with a man who only wanted her money and social connections. But one night in a New York bar, with a charming southern gentleman gave her hope for a happy ending.

Before they can get the relationship they desire, they will need to deal with the ghosts of their pasts.
BUY HERE

Her vacation timeshare has a “tiny” problem. There’s a grumpy naked man in her bed.

Janae Williams has taken a sabbatical to finish her first stand-alone research book. All she needs is a couple of months alone, to get her book and life together. She figured a remote cabin in the upper peninsula of Michigan would be just the ticket. So when a colleague offers the use of his timeshare Janae eagerly accepts. There’s just one problem, the grumpy and naked man in her bed who refuses to leave! Damond is bad-tempered, stubborn and rude. It’s a guarantee he’s going to ruin her concentration. Even worse he seems to be scrambling her brain with lust!

Damond Hall is a writer of thrillers, who’s also in a major writing slump. If he doesn’t deliver to his ravenous fans, it may tank his career, not to mention his bank account. Which is why he’s decided to spend a couple of months at the cabin timeshare a friend convinced him to invest in. Being isolated in the dead of winter should give him no choice but to write. It was working to, until stubborn Professor Janae, hijacks his writer’s hideaway. She’s annoyingly sexy, making it hard for him to focus on anything but her!

This forced cohabitation may stoke a fire that they can’t put out!
*Stand Alone Themed Series* Book Club Discussion Guide

When a top agency calls you to become their in-house make-up artist, you jump at the offer. And when your best friend asks you to be the maid of honor in her secret wedding, you ride. No questions asked.

…but for Sidneigh Jones, some things are easier said than done.

What happens when this dream job becomes the last straw in her relationship and her best friend gets cold feet at the last minute?

**This is a clean romance and the second standalone short story (around 4k words) in the Morningstar series.**

An Unexpected Love: Poet and Justice Story by Tiana Grover

Growing up an orphan left an imaginable void in Justice Morris’ heart, leaving a sinking feeling that it would never get filled. Even with a flourishing business and a long term boyfriend, something still seemed to be missing. An incident causing him to receive a lengthy jail sentence only made it worse. Vowing to stand by him, Justice buried herself in her work , but an encounter with the City’s most eligible bachelor, brings about unexpected feelings.

Jaysen “Poet” Samuels is one of the biggest party promoters that the city has ever seen, which makes way for his bachelor lifestyle. After his older brother is sent away, everything in his life changed. Vowing to be a better man, Poet tries to work it out with the mother of his children, but fate throws him in the path of Justice. With one glance, he knew that promise was about to be broken.

Unlike Justice, Tyesha lived her life in the fast lanes. Yearning money alone, the only thing she cared about was securing the bag. Until, she met Dre. Diving head first, Tyesha thought she found love and a meal ticket all in one. Only to realize all that glitters, ain’t gold.

By circumstance, the four of them embark on a road trip, and things seem to take a turn. Secrets and lies will be revealed, causing everyone to second guess what they thought about the other. Is Dre a wolf in sheep’s clothing or will he turn out to be the man Tyesha believes him to be? Will Justice finally allow someone in, or will her past and Poet’s current situation be too much for them to handle?

Prince Ahbeh Mensah Ahmed Kwasi is going to be king of Libertad Island whether he likes it or not. To add to it, he must marry on his county’s Independence Day. An infamous playboy, the soon to be king realizes that he has no real prospects and doesn’t want the ones his mother has selected for him. He changes his mind once he sees the stunningly beautiful Trinity Nehemiah, someone he knows is his match in every way. The thing is, how to get her to marry him within 30 days.
Dr. Trinity Nehemiah is searching for a bacterium that is impacting the beautiful aquatic life of Libertad Island. Finding its source and coming up with a cure is her only charge, not the island’s handsome playboy who is set on getting under her skin and in her bed. Little does Trinity know, the soon to be king is more than interested in her bedroom skills.