New Release Spotlight – In for a Penny, by Rina Gray

Penny Paige is an aspiring novelist and current ne’er-do-well entertainment writer-slash-waitress. She knows she doesn’t have this whole thing called life together. But she’s got plans. Big plans. And they hinge on winning the coveted Malcolm Dagner Writer Fellowship for up-and-coming thriller authors. If she could just get enough time and money to write her sure-to-be New York Times Bestselling Novel, she can quit her crappy job and transform from a diamond in the rough to a sophisticated author.

There’s just one problem: Malcolm Dagner ended the fellowship, and he kinda hates humanity. He rudely lets her know that there’s no way in hell he would give her a spot, even if he had a fellowship.

Just who in the hell does Malcom Dagner think he is?

Malcolm lives in solitude among the mountainous woods in Colorado, with only the occasional company of his housekeeper. A few years ago, he was a multi-award winning and best-selling author who penned the iconic Reese Masterson books. But after a series of heartbreaking events, he’s grumpy, distrustful, and absolutely will not tolerate strangers coming to learn about how to write in his home.

Oh, and he has writer’s block.

The world has been waiting for three years for the latest book, but what they don’t know is that Malcolm plans to kill off his iconic character.

Penny discovers his plans to kill his character, and she’s not having it. Mother Nature seems to be on her side, too. Stuck in a snowstorm together, Penny falls for the loveable grump, though his heart seems as cold as the winter storm. Can her optimism melt his resolve at living unhappily ever after, or will another event outside of their control destroy their shot at love? 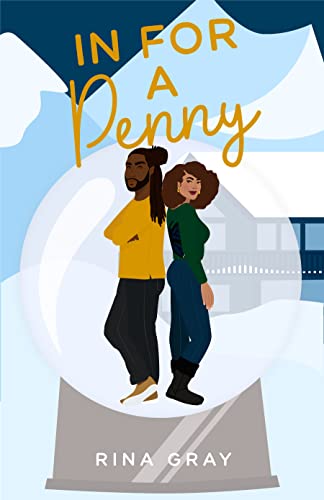 New Release Spotlight – In for a Penny, by Rina Gray