Hey Girl! Check out these new releases from May 13th-19th.

Now and Forever: a novelette (Limitless Love Book 2) by Shanicexlola 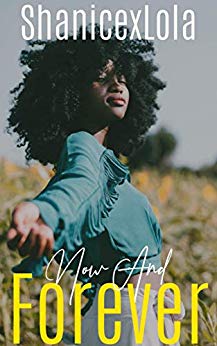 He’d taken too long to return to me.
To consider me.
To put his pride aside and submit to his love for me.
Now that he was here again, superiority belonged to me.

*Please note, this novelette focuses on a new couple and can be read as a standalone.

Fight for Love (Love, The Series Book 3) by Aubreé Pynn

Kwame and Nadia can’t see eye to eye if they were standing as close together as they could. Or so they thought…

Kwame Franklin has a nagging need to be better than his father and settle down before he’s old, gray, and loses count of how many broken hearts lie in his wake. While he’s unpacking his personal baggage, he’s picking up another. A bag that he hopes to unpack while never getting rid of its handler.

Nadia Garrett is on the path of healing and forgiving for no one else but herself. Faced with the demons of her past, she tries her best to keep a level head and fight them head on. What she doesn’t know is that she’s always had a protector to help with the fight.

Can Kwame and Nadia finally fight for love, or are they going to call a truce once and for all and bow out gracefully?

Find a woman, love her, make her your wife, have babies. That was the definition of happiness that Karson Laine was taught. When Karson found the woman that made his heart bleed with jubilation and love; he devoted himself whole heartedly to her, knowing she would bear his last name, and give him the babies he desired. With a happy marriage, and a beautiful child, Karson was living the life he’d always wanted, but no one had taught Karson that not all good things last forever. What Karson thought would be forever, ended with a lifetime still left to be lived. Karson was sucked into a whirlwind of hurt, confusion, and despair. Misguided by scarred emotions, Karson used the wrong method of coping that was a detriment to his livelihood. There seemed to be no escape for Karson until there was Sunshine Bennett. With her own emotional and mental scars, Sunshine was nowhere near ready to help someone heal but there was something genuine in the connection between them. Karson and Sunshine took from each other as much as they gave, breathing fresh air into their lives. In this profound novel, journey with Karson and Sunshine as they worked to learn to first love themselves before being able to love someone else. Would they be able to overcome their scars or would their time together run out, extinguishing any opportunity for happiness in their lives?

His Loyal Wife (Logan and Atarah Book 2) by Shenaé Hailey

Please note: This is an 11,600 word novelette that ends with a cliffhanger.

In part one of Logan and Atarah’s story, Her Unfaithful Husband, you were warned to expect the unexpected. Did you heed that warning, or were you caught by surprise at the end?

Hang on to your seats because things are just getting started, and part two will take you on an even crazier ride!

His Loyal Wife follows Logan and Atarah after damaging secrets are revealed. Secrets that have the potential to destroy their marriage before it begins. Fully aware of Logan’s infidelity, Atarah is stuck with the choice of allowing the past to be the past and moving forward with their future… or making an example out of the only man she ever trusted with the gift of her love in the present with no regard for the future.

Please note: This is an 11,600 word novelette that ends with a cliffhanger.

Perfectly Incomplete: A Novella by Chiquita

Meet Siouxsie; a woman whose outer shell is often complimented on by others, but inside, her soul is rotten to the core. Due to the pain inflicted on her by others, as well as a few poor decisions of her own, her once perfect world has suddenly been torn apart. Instead of dealing with the pain head-on, she drowns her sorrows in alcohol, drugs, and whatever else she thinks will numb her. Siouxsie longs to feel whole again, and one day she’ll get exactly what she’s been praying for…

Outta Her League by Charae Lewis

“The heart has reasons that reason does not understand.”

When Rhyon is presented with an opportunity that can change the course of her life, she’s left stumped. Unfortunately, this chance includes a risk, and after careful consideration, Rhyon throws caution to the wind. What she didn’t anticipate was encountering Santana. An entertainment lawyer, who has a cocky personality that leaves her in a trance. He was someone that she didn’t foresee entering her world, and after experiencing the very essence of him, she can’t seem to let go. But there’s one person with her eyes on the very same prize Rhyon possesses, waiting to throw her shot.

Rhyon is at her wits end with balancing her “new life” and trying to keep up with Santana. But with new experiences comes new problems and she’s not sure if she’s capable of dealing with them on her own. She needs an outlet, but what she doesn’t expect is her new outlet causing her more stress than she could ever imagine.

After Faith Caldwell calls off the cruise with her trifling boyfriend, she decides she might as well not waste her money – she’ll go alone. Having packed very little makeup and no hair extensions, she wasn’t quite ready to meet the man of her dreams on the ship. But what good does is it to meet an awesome guy when you’ll only know him for a few days? Life has taught Faith that more often than not, you just can’t depend on people. Why would this person be any different?

Blaise Hawthorne is a well-paid musician whose talents keep him traveling the globe. The cruise is an opportunity for him to reconnect with his loving, boisterous family. But then he meets the snappy, naturally beautiful woman who makes him think twice about his jet-setting future.

This is the first book in the Faith in Love series, a collaboration by multi-published, award-winning author Michelle Stimpson and newcomer Gina Johnson. If you’re a fan of clean, Christian, and/or billionaire romance, this one will do your heart good!

Imagine knowing a person most of your life.

You know their flaws, the things that make them tick, the hearts they’ve broken, and the chipped pieces in their armor, and still, you love them completely… unconditionally.

That is Khalil and Ajah.

Best friends since they were eating dirt together. Their bond is unbreakable, but could they survive that one time in college?
Khalil has tried moving on from the events of the past, becoming a serial dater with no satisfaction. His recent girlfriend, Destiny, is madly in love with him, and she refuses to accept rejection from Khalil or the destruction of their relationship. But are his feelings the same for her, or is he in love with someone else?

Then there’s Ajah. While enjoying the single life, she encounters the one-night stand that haunts her for longer than she wants.

Will these two friends place all their cards on the table and see if revisiting unfinished business is worth it? Or will they continue playing friends while playing the field?

Join Ajah and Khalil as they work to strengthen their bond as best friends while trying to hold on to the lives they have separate from each other. Life doesn’t always go according to plan, and we all know there’s a reason for everything.

All to Myself: An Urban Romance Novella by Aubreé Pynn

Who was I to deny her request after she fulfilled all of mine?

Nashaun Williams is the safety net for his family. He will go to war and back to ensure that everyone he loves is protected. With two strikes on his record, he’s trying to maneuver through the streets as carefully as he can. Known to be an enforcer, he is thrown into a weekend of responsibilities with a beautiful stranger. Attempting to deny the pull she has on him, he can’t get enough of her. With the reality of this new found haven being short lived, looming over him, Nashaun tries his best to break away from her.

Nina Jefferson is a boss in her own right. She is smart in the books and slick at the mouth. However, she cannot deny Nashaun and everything that comes along with him. Her instant infatuation with him makes her want to deny everything she knows just to have him all to herself.

Can Nashaun finally have his own safety net or will everything be taken away from him?

Find out in All to Myself: An Urban Romance Novella