They were the best of friends in college but after going off into the world their lives drastically changed. Now, Dylan James, in-house counsel for a D.C. lobbyist firm is once again face-to-face with Cristine Palmer, defense attorney from New York. The passion that had been on a low simmer because of prior relationships is now on full blast. But Dylan has a dark side that he’s certain Cristine will not understand. Cristine has not come this far to walk away from her feelings for Dylan again, so following him to Chicago and bidding for the lover she’s always dreamed of is her only option. 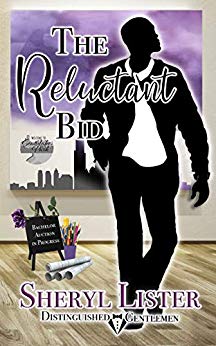 The Reluctant Bid by Sheryl Lister

A favor for the one person he can’t refuse brings architect Romeo Alexander back to the one place he vowed never to step foot in again. But he plans to be on the first flight out of Southlake Park as soon as the auction gavel comes down. However, he doesn’t count on the beautiful woman who wins his bid or the instant, undeniable attraction between them. Romeo learned from his parent’s toxic marriage to steer clear of relationships. Yet the more he resists, the more he wants Zola…to have and to hold.

Settling down isn’t high on Zola Harrington’s list, either. The freelance photographer is having too much fun traveling to her next assignment. All that changes when she captures a sexy, brooding Adonis in her lens. From an impulsive bid and smoldering kiss to a whirlwind Las Vegas affair, Romeo is heating up her nights. Zola is tempted to say yes to a lifetime of passion…if she can convince the reluctant bachelor to truly let her into his life.

Losing the Bid by Suzette Riddick

Parading in front of a room full of women is not Adrian Collins’ idea of a good time. The last thing he wants to do is fly to Chicago for a bachelor auction. But, how can he refuse to help the woman who nurtured him after his mother abandoned him when he was a toddler? Going back to the site of his deepest wounds is where he’ll meet his destiny, Daphne Turner. Adrian is disappointed when Daphne slips through his fingers after losing the bid to an old flame from his past.

Reeling from the death of her uncle, Daphne accepts her best friend’s offer to attend a fundraiser in the windy city. Good cause or not, the idea of spending hard-earned money on a date is ludicrous. That is, until she locks eyes with ruggedly-handsome bachelor number twelve. Unfortunately, the night doesn’t end as Daphne hoped. In the company of a sexy stranger to chase her blues away.

Fate intervenes when Adrian and Daphne’s paths intertwine. However, Adrian’s past threatens to rob them of a life of happiness. Will Daphne’s love be enough to heal his wounded soul? 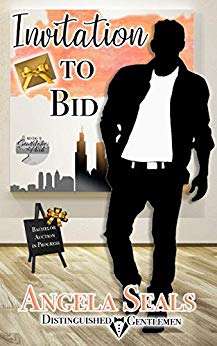 Invitation to Bid by Angela Seals

CHICAGO MADE THEM WHO THEY ARE.
NOW IT’S TIME FOR THEM TO PAY IT FORWARD.

When Nicholas Brown gets a call from Mama Peaches to come back home for a neighborhood bachelor auction, he doesn’t want to do it. But who can say no to Mama Peaches? As a surgeon known for taking calculated risks for big rewards, he lives his life fast, crazy and on the edge. To save himself from the claws of women placing bids at the auction, this bachelor comes up with a scheme… Despite how things ended, Nick has always held a torch for his beautiful, former high school sweetheart, Raina Lawson. So, who better to bid on him than a woman he trusts? She’s a safe bet, which makes her the best bet!

After high school graduation, Nick left her high and dry without any real explanation. And now, the impressive doc wants her help. As a social worker, she’s great at helping others, so when she learns more about Nick’s reasons for coming home, she can’t help but sympathize with him. However, despite her best efforts, she’s still bitter about the break-up and to rub it in even more, Nick seems to have only gotten sexier with age. Getting played sucks but ignoring their chemistry sucks more. Only this time, she isn’t blinded by his charm. This time, he’s playing by her rules.

The Contingency Bid by Sherelle Green 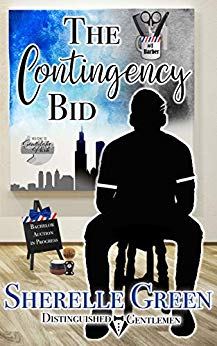 There is nothing barbershop owner, Kadaris Kathan, wouldn’t do for his former foster mother turned babysitter, Mama Peaches. Even if that means participating in the upcoming Southlake Park bachelor auction to raise money for the neighborhood. However, Mama Peaches has one request…Kadaris must work with etiquette coach, Khloe Madison, to polish his thuggish exterior before the auction. Despite their chemistry, he hasn’t gotten along with Khloe in years and he’s ready to send her packing. Imagine his surprise when Khloe makes him an offer he can’t refuse.

Khloe Madison has never passed up on a challenge and rough-around-the-edges Kadaris is her biggest challenge yet. He’s stubborn, arrogant, and unfortunately, too sexy for his own good. In order to get through this, she has a proposition for him. All she needs is ten days to turn Kadaris into the ideal bachelor and if he isn’t singing her praises after that, she’ll be at his beck and call the week after the auction. However, if this princess of the neighborhood wins, he’ll regret the day he ever called her prim and proper. 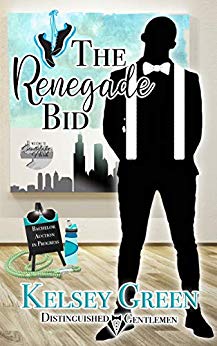 The Renegade Bid by Kelsey Green

Cadence Alexander was made for lave and luxury. Literally she came from #blackexcellence. Her upper class parents worked hard to ensure she never had to, but when she bids on the handsome and chiseled, Ace Kathan, at a neighborhood auction, she’s in for a rude awakening.

World traveler Ace Kathan is always down for a thrill. So when his G-Ma, Mama Peaches, asks him to explain his date he’s happy to explain an extravagant one. But what he has planned will be anything but elegant. Nothing like testing a girls resilience and adaptability by roughing it on his rugged million dollar estate. 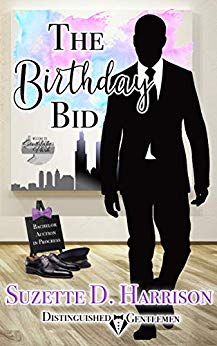 It’s blackmail, blindfolds, and her fortieth birthday. How else would beauty influencer, Senaé Dawson, wind up at a bachelor auction? Whisked away without a say, her besties treat her to a birthday bid at an auction featuring decadent Black men. Inevitably infected by the hype, Senaé’s excitement hits hyper drive until the blindfold’s removed from her eyes. She’s dumbstruck to discover she’s just “bought” her ex-husband.

Lexington “Lex” Ryde turned his love for cars into a multi-million dollar private transportation business serving Black Hollywood’s A-list. His line of work taught Lex to be prepared at a moment’s notice. But seeing his ex-wife face-to-face for the first time in twenty years leaves him feeling as if “sucker-punched by Tyson and Holyfield.” Thanks to their problematic past, neither is pleased with this bachelor auction “ridiculousness”, or the instant flare of hot, sexual attraction erupting between them. But being Mama Peaches’ first foster child, Lex can’t renege. He’s stuck with the auction results…and the unpleasant truth that he’s still in love with his ex.

Take the ride with Senaé and Lex! They’ll confront a painful past, consider their present, and encounter an unwanted admirer who must be dealt with. 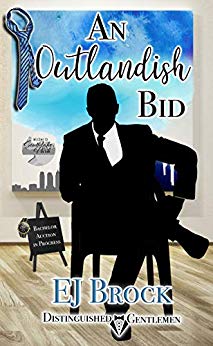 An Outlandish Bid by EJ Brock

LIEUTENANT TAYLOR has spent his life haunted by the tragic loss of his mother. His babysitter, Mama Peaches, stepped in and filled the void. As loving and maternal as Peaches was, he never got over not being able to fix his mother. Subconsciously driven by the fact that he couldn’t save her, he has spent the last twenty years buying and fixing old houses. With more money than he can spend, he moves from Southlake Park to New York City, in search of a topnotch Investment Banker.

OCTAVIA WASHINGTON is a much sought-after Investment Banker. She has cultivated a semi-symbiotic workaholic relationship with Lieutenant. So much so that they are both unsuccessful in their personal love lives. Lieutenant’s nerves are rattled when he gets a call from Peaches about participating in a bachelor auction. He does not want to be sold like fresh meat, but he feels obligated. So, he comes up with a scheme in the name of Ms. Octavia Washington.

Will they be able to pull the wool over Mama Peaches’ eyes? Or will the wool finally be pulled off of their own…

Switched At Bid by Nicole Falls 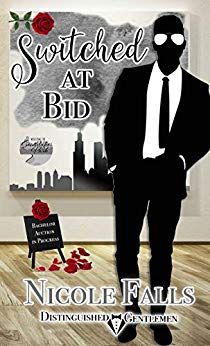 Lifelong friends Maurice Kirkwood and Alecia Woods briefly shared an ill-fated attempt at crossing the line into something more a few years ago. The decision to split was a mutual one, but left residual feelings of longing on both sides of the chasm between them. Miscommunication led to the breakdown, but Maurice is determined to mend the rift and reunite the two of them permanently. Alecia, however, is not so much on the same plan as Maurice.After being being drafted to participate in a bachelor auction to help raise funds for the revitalization of his old neighborhood, Maurice sees the pieces of trying to reconnect with Alecia falling into place. Enlisting the help of their other best friend— and Maurice’s twin—Monica, a plan is hatched to bring Alecia and Maurice back together again; for good this time.

Author’s Note: These characters first appear in the short story, Pucker Up, which can be found in Sparks Fly by me! The story provides some context, but does not necessarily need to be read to enjoy this novella. 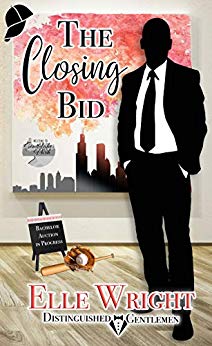 The Closing Bid by Elle Wright

There were few bright spots in MLB Relief Pitcher Christian Knight’s life, and Mama Peaches was one of them. When she requests his presence at her neighborhood bachelor auction, he agrees—under one condition. His participation must be kept under wraps. He may be one of the best “closers” in the league, but the last thing he needs is a media circus. Unfortunately, the persistent woman who wins his company is a reporter. She stands for everything he tries to avoid, but their instant connection and her undeniable beauty are slowly breaking through his exterior whether he likes it or not.

One night, one goal. That’s all sports journalist Ashton Joy (A.J.) Cook needs to land the exclusive interview of her dreams. She’s worked overtime to earn respect and interviewing the mysterious baseball player is an opportunity too delicious to pass up. Using her sly reporter skills, A.J. arranges the auction’s winning bid for Christian. Yet, the man behind the legend is infuriating in more ways than one. Their explosive chemistry is giving her whiplash and soon, A.J. must decide between doing what’s best for her career or following what she feels in her heart.

The Bid Catcher by Anita Davis 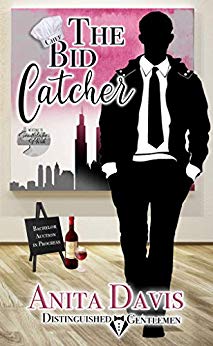 All Jeremy Brighton ever wanted to do was be a chef and own his own restaurant. Failed attempts at sustaining his dream sends him back to Chicago where he knows his restaurant can thrive. Problem is, the prime location for his neighborhood is in major need of revitalization. A bachelor auction planned to raise the remaining funds necessary to restore the hood may be the remedy to Southlake’s problem, but there’s no way Jeremy would ever agree to be a bachelor in the auction. Will his stubbornness cost him his restaurant dreams?

Naima Grant has moved to Chicago for several reasons: to be closer to her favorite cousin; to spend more time with her grandmother; and to put as much distance as she can from the life she once shared with her ex-husband. Southlake Park may be her good luck charm, especially when she learns she’ll be spending some much-needed time with her childhood crush. Yet just like before, he only sees her as a friend, but she plans to make the most of their time together whether he’s ready for her or not.

*”The Alpha Bid” by Ty Young and “The Rival Bid” by Reese Ryan will be available in May!

PrevPreviousReview – Thief, by B. Love
NextReview – Live at Five, by Te`RussNext